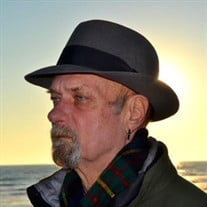 William “Bill” Castleberry Wright II, 72, passed away January 10, 2021. A native of Greenville, SC, son of the late Marion Earl and Marion Thomas Wright, he was a U.S. Navy Vietnam Veteran, a retired construction engineer, and a longtime employee of BMW. Bill grew up in Greenville, SC, and loved his hometown all through his life. He took pleasure in watching it grow and enjoyed the many pastimes it had to offer, including the music scene and the diverse cultural and outdoor activities. A lifelong member of the Episcopalian faith, Bill grew up as a member of Christ Church. As an adult, he joined St. Francis, where he served as rector, and St. James, where he was a member of the choir. Bill was a lover of travel from a young age and lived and worked in various countries, including Italy, Saudi Arabia, the UAE, and Croatia. He spent the last twelve years of his life retired, splitting his time between Greenville and Milna, Brač, Croatia, where he happily relaxed into the Dalmatian Coast’s fjaka state of mind, in the sweetness of doing nothing. He also found his beloved canine companion, Zorro, in Croatia. Zorro followed him home to Greenville in 2017. In addition to travel, Bill loved music. He said it was in his bones. Whether it was an unheard of jazz band in a dark, back alley joint, a five-day long music festival featuring some of the greats, an impromptu street band, or the symphony, he could always be found enjoying the sweet sounds of music. Of all his interests, his greatest passion was sailing. In 2014, he had the opportunity to realize a life-long dream of sailing the Mediterranean when he signed on as a crew member for someone sailing a boat from Korčula, Croatia, to Gibraltar, UK. That trip was one of the highlights of his travel life. Surviving are his life partner, Jeri Sarracino of the home; a daughter, Elisabeth Wright (Chris) of Charlotte, NC; a daughter, Renee “Daisy” Wright Mussetto (John) of Greer; one brother, Jay Wright of Naples, Italy; and two grandchildren, Landon Paul Lockwood and Adeline Belle Lockwood. He was predeceased by a son, William “Liam” Castleberry Wright III and a brother, George Thomas Wright. His brother Jay has described him as a “wheelin’, dealin’, rootin’ tootin’, and straight shootin’ good un” and one of his biggest heroes. A memorial service will be held at a later date. Memorials may be made to Open Arms Hospice at McCall Hospice House, 1836 W. Georgia Rd., Simpsonville, SC 29680. Online condolences may be made at www.thewoodmortuary.com To send flowers or a memorial gift to the family of William "Bill" Wright please visit our Sympathy Store.

William &#8220;Bill&#8221; Castleberry Wright II, 72, passed away January 10, 2021. A native of Greenville, SC, son of the late Marion Earl and Marion Thomas Wright, he was a U.S. Navy Vietnam Veteran, a retired construction engineer, and a... View Obituary & Service Information

The family of William "Bill" Wright created this Life Tributes page to make it easy to share your memories.

Send flowers to the Wright family.