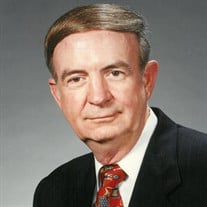 Thomas J. Brannon of West Columbia, for many years a widely respected Baptist leader in South Carolina and Texas, passed away Nov. 26, 2021, after a period of declining health. The funeral service will be Monday, Nov. 29, 2021, 3:30 pm, at The Wood Mortuary, 300 West Poinsett Street, Greer, SC. Visitation will be at the mortuary from 2:15 to 3:15 pm that day. Dr. Ronald “Dee” Vaughan, pastor of St. Andrews Baptist Church in Columbia, will officiate. Burial will follow in Wood Memorial Park in Duncan, SC. For more information, go to www.thewoodmortuary.com, where the service will be streamed live and also available for later viewing. Tom was 83. A resident at Laurel Crest Retirement Community in West Columbia, he had fought multiple forms of cancer and several other ailments in recent years. Mrs. Adale Hammond was his devoted caregiver and helper for both Tom and his late wife, Sandra, in recent years. Sandra, the former Sandra Annette Raines, passed away Dec. 1, 2020. They were married for 55 years. Tom was a son of the late Mr. and Mrs. J.A. Brannon. He is survived by a sister, Mrs. Lorene Trout, and a brother, Paul Brannon, both of Greer, along with many nieces and nephews. Tom grew up on a farm on the outskirts of Greer; while in high school he developed an interest in writing. In 1955 he made a commitment to fulltime Christian service. These two callings shaped the rest of his life. He graduated from North Greenville Junior College and Furman University; he also attended Southeastern Baptist Theological Seminary in Wake Forest, NC. He worked in a textile plant and grocery store to pay his way through school; while still attending Furman he served as publicity director for the Greenville Rescue Mission. He served two summers as student missionary in Kansas, Washington and Oregon. Those experiences helped shape Tom’s lifelong support for Christian missions. In later years he and Sandra visited Southern Baptist missions work in Brazil, Australia, New Zealand and Europe, among others. Tom directed communications for the Baptist General Convention of Texas (BGCT) from 1980 until his retirement. He led a 13-member team that handled all aspects of communication for the BGCT, a fellowship of more than 4,000 congregations with some 2.2 million members across Texas that partners with the Southern Baptist Convention (SBC). Earlier he served for 15 years as director of public relations for the South Carolina Baptist Convention, a similar fellowship of more than 2,100 congregations across the state, also SBC-affiliated. Tom directed all aspects of the convention’s communications program. He played a key role in planning and coordinating the convention’s important annual meetings, which drew thousands of Baptists together for business and inspiration. Tom began his professional career as director of public relations for the SC Trade Schools and served there four years. In 1965 he was elected director of public relations for the SC Baptist Convention. Over the years he wrote many articles, mostly for denominational publications, and provided photos to accompany many of these. He won numerous awards for writing, design, photography and public relations programs. Tom was a member of the Public Relations Society of America. He was also active as member and president of the Religious Public Relations Council, an interdenominational group for religious communicators. He was also member and president of the Baptist Public Relations Association, (now Baptist Communicators Association), a nationwide group for communications workers serving Southern Baptist churches and agencies, which made him a Lifetime Member. He was pastor of Amelia Street Baptist Church in Orangeburg for a time and over the years spoke on missions and communications to many churches across Texas and South Carolina and beyond. Holston Creek Baptist Church in Inman licensed Tom to preach; the church was an important part of his early life. Later he and Sandra were members of Springdale Baptist Church in West Columbia and Park Cities Baptist Church in Dallas, Texas. After Tom and Sandra retired, they moved from Dallas back to Columbia in 2002, where they were members of St. Andrews Baptist Church. Tom served the church as deacon, among other roles. In 2019 they moved to Laurel Crest Retirement Community in West Columbia. A fitting tribute to Tom was written by his long-time friend and work colleague, the late Flynn T. Harrell, who directed the South Carolina Baptist Convention’s financial operations during the years Tom worked there: “One cannot fail to closely observe the work and spirit of Tom Brannon without a keen realization that here is a man who deeply loves God and his fellow man, and one whose talents are being eminently used for the glory of God,” Flynn wrote. In place of flowers, memorial gifts may be made to St. Andrews Baptist Church in Columbia. For contact information, go to https://mysabc.org or call 803-798-7325.

Thomas J. Brannon of West Columbia, for many years a widely respected Baptist leader in South Carolina and Texas, passed away Nov. 26, 2021, after a period of declining health. The funeral service will be Monday, Nov. 29, 2021, 3:30 pm, at The... View Obituary & Service Information

The family of Thomas J. Brannon created this Life Tributes page to make it easy to share your memories.

Thomas J. Brannon of West Columbia, for many years a widely respected...

Send flowers to the Brannon family.