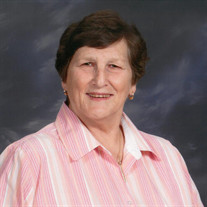 Suzanne Way Peden, 78, of Seneca entered into peaceful and eternal rest Sunday, December 13, 2020 at the residence of her daughter Ginger Michalek in Greer. Suzanne was born June 6, 1942 to the late James “Big Jimmy” and Evelyn “Emmie” Way. She is survived by her beloved brother Colonel James Boyd Way, USMC (retired) and his wife Susan Owings Way of Greenville; her daughters Kathy (Jeff) Montjoy of Simpsonville, Ginger (Ken) Michalek of Greer and her sons James “Jimmy” Peden of Hendersonville, TN. She is also survived by the pride and unbridled joy of 4 beautiful grandchildren Ashley Suzanne Montjoy of Johnson City, TN, James “Jay” Bryan Montjoy, Abigail Grace “Abby” Peden and Caroline Rose “Rosie” Peden. During the time of Suzanne’s youth, St. George was a small beau colic town filled with her maternal grandparents (Boyd and Grace Magill), her aunts and uncles, and cousins Bill Owens, Jerry Owens, Kathleen Owens Gudridge, Mike Walters, Curt Walters, Don Walters, David McCormack and Charles McCormack. As the first female grandchild she was most often with Grandmother Magill taking their afternoon nap or ‘helping’ Granddaddy Magill at the Dorchester Eagle-Record Newspaper office. Suzanne also spent the summers at The River (Edisto River) with many fond memories of general mischief involving her cousin Bill. She is a 1960 graduate of St. George High School having played on the basketball team and played the trumpet in the St. George High School Band. Suzanne continued her education at Anderson College with a basketball scholarship and graduated in 1962. In 1963, Suzanne moved to Washington, D.C. to work with the FBI. In short order she determined the FBI did not allow women to be field agents and so she quit the FBI and moved to Greenville, SC. While in Greenville she worked as a nursing assistant at St. Francis Hospital and re-connected with Thomas “Tommy” Peden. Suzanne and Tommy originally met at Anderson College and began dating in 1964. Tommy was enlisted in the U.S. Army and ultimately stationed in Stuggart, Germany. Suzanne and Tommy married June 10, 1965 in Stuggart, Germany and would spend much time traveling and camping throughout Germany, Switzerland, and Italy. They returned to Lancaster, SC to begin raising their 3 children. They lived in Taylors, SC for a few years and moved to Seneca in 1976. It is in Seneca that Suzanne met her most beloved and best friend Loretta Randall. Sue, as Loretta called her, and Loretta forged an unbreakable and the most enduring friendship filled with life’s sorrows and certainly but far more joy, spaghetti dinners and Mexican restaurants. Suzanne was a fierce tennis competitor and immersed herself in the Seneca tennis community with friends Betty Dubois, Betty Lou Dobson, and Lucille Myers. Her career in the Oconee County Library provided her with the ability to help others find the perfect book or research to fill her ever inquisitive mind. Suzanne’s retirement was a milestone in her life and provided her the time to piddle and plant flowers throughout her yard and to spend time with her family; most especially her grandchildren and her much loved dog Charlie. Another hallmark of Suzanne’s life was her love for animals; all animals. Over her life she always had a pet and was a particular lover of cats. She enjoyed feeding the birds and hummingbirds and even provided for the random squirrels, chipmunks, opossum and the occasional raccoon. Suzanne grew up learning of Christ as her Savior while singing hymns from the Cokesbury Hymnal with Grandmother Magill. She was a member of St. Mark United Methodist Church in Seneca. But her ultimate call to faith was found at the Seneca Presbyterian Church where she established her faith family. Suzanne found peace in the sanctuary not just during services but also when she would spend time straightening the pews and sharpening the pew pencils. It was her way of providing a small service for the church she loved so much. And all who knew her, know that Thursday’s were dedicated to her Bible study. That study group provided her with family, deeper understanding of faith and a ‘belonging’ that fed her very soul. Suzanne Way Peden, daughter, sister, mother, and friend would want each of you to remember her in your own special way, but foremost know that she loved you. Memorial services will be held Saturday, December 19, 2020 at 2:00 PM at The Wood Mortuary, 300 W. Poinsett St., Greer, SC with webcasting available at www.thewoodmortuary.com Interment services will be arranged for June 6, 2020 at the St. George Cemetery, St. George, SC. In lieu of flowers, it is Suzanne’s wish for donations to be made to Lutheran Hospice of Greenville, 429 S. Main St., Suite 3, Greenville, SC 29601, the National Humane Society, 40 E. Main St. #364, Newark, DE 19711, or Seneca Presbyterian Church, 115 W. South 1st St., Seneca, SC 29678. Online condolences may be made at www.thewoodmortuary.com

Suzanne Way Peden, 78, of Seneca entered into peaceful and eternal rest Sunday, December 13, 2020 at the residence of her daughter Ginger Michalek in Greer. Suzanne was born June 6, 1942 to the late James &#8220;Big Jimmy&#8221; and Evelyn... View Obituary & Service Information

The family of Suzanne W. Peden created this Life Tributes page to make it easy to share your memories.

Suzanne Way Peden, 78, of Seneca entered into peaceful and eternal...

Send flowers to the Peden family.