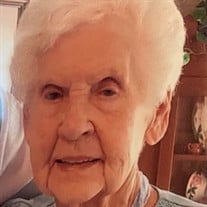 Sarah Wade Black, 96, widow of Clifton Thomas Black, passed away August 28, 2021. A native of Spartanburg County, daughter of the late Mose and Lillian Bennett Wade, she was a retired employee of Fiber Industries and a member of Victor Baptist... View Obituary & Service Information

The family of Sarah W. Black created this Life Tributes page to make it easy to share your memories.

Send flowers to the Black family.