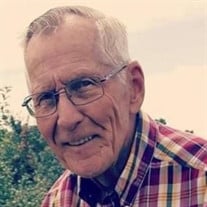 Roy Walter Tapio, 86, of Greer, SC, went to his Heavenly home on Monday, January 24, 2022. Although the last several years had been difficult for him as he struggled with dementia, he is now whole in body, mind, and spirit. Roy was born at home on December 9, 1935, to the late John & Hilda Tapio. He was the second youngest of 11 children that lived in a small farmhouse in Klingville, MI. After he graduated from high school, he joined the Army where he served his country proudly for two years. In his early years, he worked at Celotex in L’Anse, MI, and eventually started to do what he loved, and that was building houses. Roy married Shirley (Keippela) Tapio on June 7, 1958, in Tapiola, MI. Together they raised 7 children in Baraga, MI. Tiring of the cold winters, Roy moved his family to Florida in 1976. Over the course of their marriage, he was very proud to say that he built 17 houses for his bride, all of which had a sauna. He was a building contractor/developer in south Florida for nine years, where he built hundreds of houses and apartments. He built his last house in Ironwood, MI in 2011 at the age of 76. He was an avid gardener, and always planted so much that he had to share with the neighbors. As he would tell you, nobody had strawberries that tasted as good as his. He took great pride in his work and strived for perfection. But the most important thing in his life was his faith. He was a lay preacher in the Apostolic Lutheran Church, where he shared his love for his Lord & Savior and God’s amazing grace that had saved his soul. Roy is survived by his wife Shirley, and seven children, Sharon (Harvey) Niska of Gilbert, AZ, Mike (Gail) of Greenville, Steve (Kathryn) of Dayton, WA, Sandy (Dale) Torni of Ironwood, MI, David (Lisa) of Long Beach, WA, Brian of Vancouver, WA and Kevin of Ann Arbor, MI; 16 grandchildren and 23 great grandchildren with 2 on the way. He is also survived by two sisters, Lillian Heikkinen of Detroit, MI, and Ruth Liimatta of Chassell, MI and many nieces and nephews. Roy was predeceased by four sisters, Mildred Tikkanen, Helen Juntunen, Alice Kerr, Verna Storm, and four brothers, Paul, Albert, Edwin and Alden. Funeral services will be held on Monday, January 31, 2022, at 11 am at Eastside Apostolic Lutheran Church, with Pastor Raymond Hilman officiating. Visitation will be from 9:30-10:45 am. Graveside service will be immediately following at Mountain View Cemetery, with a luncheon to follow at the church. Dad, we are going to miss you, but it brings us great joy to know you are home with the One you longed to see. The disease that robbed you of your memory is gone, and now you know who you are, the child of the most high King. “For now we see through a glass darkly; but then face to face. Now I know in part; but then shall I know even as also I am known.” 1 Cor 13:12 Online condolences may be made at www.thewoodmortuary.com

Roy Walter Tapio, 86, of Greer, SC, went to his Heavenly home on Monday, January 24, 2022. Although the last several years had been difficult for him as he struggled with dementia, he is now whole in body, mind, and spirit. Roy was born at... View Obituary & Service Information

The family of Roy W. Tapio created this Life Tributes page to make it easy to share your memories.

Send flowers to the Tapio family.