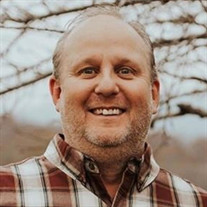 Ronald “Ronnie” Eugene Newton, Jr., loving husband, father, and son, walked into the arms of Jesus on September 23, 2021, at the age of 54. Ronnie was born on September 15, 1967, in Newport News, Virginia, to Ronald Eugene Newton, Sr. and Joann Rowland Newton. He has been a dedicated employee of BMW for the past 20 years. He and his wife, Amanda “Mandi” Newton, married on April 4, 2003, and raised four amazing children; Katelin, Todd, Carter and Cole. Ronnie had a passion for the outdoors. His hobbies included fishing, camping, kayaking, and hunting. He found joy in sitting on his back swing or riding his grandsons on the gator to enjoy the mountain view. He was known for his trickster jokes, his infectious belly laugh, and his kind, selfless generous spirit. He is survived by his mom, Joann Newton of Greer; wife, Amanda “Mandi” Warner Newton of the home; his four children, Katelin Holliday (Matt) of Landrum, Carter Newton of the home, Todd Carroll and Cole Newton, both of the home; three sisters, Robin Wellmon and Leslie Martin both of Greer and Ginger Dauenhauer of Pelzer; three grandsons, Judson, Grady and Max and several cousins, nieces, nephews, aunts and uncles. Ronnie was preceded in death by his father, Ronald Eugene Newton, Sr., two sisters, Rhonda McCuen and Debbie Mellow and his great niece, Madelyn McWilliams. A memorial service will be held at 6:00 p.m. Sunday, September 26, 2021, at the home of Ronnie Newton, 470 Gibson Road, Landrum, SC, conducted by Pastor David Grigg. In lieu of flowers, the family requests that checks be made payable to Carter and Cole’s Scholarship Fund and sent to the Bank of Travelers Rest, or 460 Gibson Road, Landrum, SC 29356, or 470 Gibson Road, Landrum, SC 29356. Online condolences may be made at www.thewoodmortuary.com.

The family of Ronnie Newton created this Life Tributes page to make it easy to share your memories.

Send flowers to the Newton family.