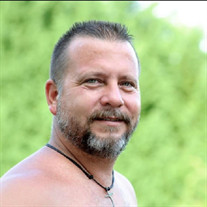 Ronald Edwin Wilkerson, Jr., 52, passed away March 20, 2022, surrounded by his family. Born and raised in Lakeland, Florida, Ron moved to the Upstate of South Carolina in 2011 to be with the love of his life. He was a former employee of Ron Wilkerson Plumbing, BMW and Lowe’s Home Improvement. Ron was a patient and amazing father to nine children and a wonderful grandfather to twelve. He loved his parents dearly as well as his younger brother. He was devoted, loyal and adoring to his “soul mate” and fiancé. Those who knew Ron would tell you what an amazing guy he was. He was a point of stability for all that loved him. He was hard working, quick-witted, funny, compassionate, and generous to anyone that needed help (even complete strangers). He was fiercely protective of his family, yet capable of bringing a calming peace when needed. Ron was jokingly referred to as the Pied Piper, not only for his ability to draw strangers and stray animals to him, but also for his ability to make friends in an instant. Ron loved being outdoors, especially when spending time with his two devoted dogs. Ron will be lovingly remembered by his fiancé, Michelle Horne of the home; parents, Ronald Edwin and Beatrice Morales Wilkerson of Lakeland, Florida; children, Ronald Kody Wilkerson (Vanessa), Kristin Noel Morgan (Blake), Kyle Mathew Wilkerson (Ayla), Kaleb Austin Wilkerson, Kameron Michael Wilkerson (Brittney) all of Lakeland, Florida, Ian Swanson (Eden) of Greer, Haley Guthrie (Noah) of Greer and Aiden Mondeau (Karissa) of Taylors; a brother, Rodney Wilkerson (Vanessa) of Lakeland, Florida; and eleven grandchildren, Brayden, Madisyn, Eli, Logan, Khloe, Isaiah, D.J., Solly, Abby, Marin, and Mavis, also a niece, Emily Wilkerson and a nephew, Colton Wilkerson. Ron was preceded in death by one son, Alexander Mondeau, one grandson, Bentlee Eugene Wilkerson, paternal grandparents, Edwin and Clara Wilkerson, and maternal grandparents, Eva Atchison and Harry Cave. A private Celebration of Life service will be held in Lakeland, Florida on April 16, 2022. In lieu of flowers, memorials may be made to Greenville Humane Society, 305 Airport Road, Greenville, SC 29607. Online condolences may be made at www.thewoodmortuary.com

Ronald Edwin Wilkerson, Jr., 52, passed away March 20, 2022, surrounded by his family. Born and raised in Lakeland, Florida, Ron moved to the Upstate of South Carolina in 2011 to be with the love of his life. He was a former employee of Ron... View Obituary & Service Information

The family of Ronald Edwin Wilkerson, Jr. created this Life Tributes page to make it easy to share your memories.