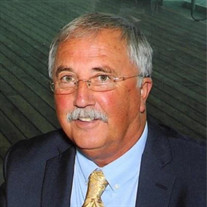 After a seven-year battle with multiple health issues, Robert Lee Strickert, 77, surrounded by loving family and friends, passed peacefully at his residence on Friday, August 27, 2021, in Anacortes. Bob was born on March 31, 1944, in Anacortes, the second of three sons born to George and Alyce (Omundson) Strickert. He graduated from Anacortes High School, Class of 1962. He joined the National Guard in 1964. While still with the National Guard, Bob joined the Anacortes Fire Department as a Firefighter / EMT in 1965. He studied at Skagit Valley College to further his education. He kept himself productively engaged in between his two major occupations by selling real estate or building homes around Anacortes with his friend and partner, Bill Ross. Bob's entrepreneurial spirit developed back in high school when he dabbled with picking oysters and juggling his sleep time to handle both class and his enterprise. Bob was a man who measured his life not by the number of breaths he took, but by the moments that took his breath away. One such occasion, worthy of mention, was when he met the love of his life, Cathy Eileen Trout from South Carolina, while she was visiting her brother in Anacortes in 1984. She literally took his breath away and he lost no time in proposing to her. They were married three short months later in Greer, South Carolina, the hometown of his bride. The couple then moved back to Anacortes to make their home and living. Bob was honorably discharged from the National Guard in 1970 but stayed on with the Anacortes Fire Department through 1994 when he retired a few years short of 30 years of service. Bob also served on LEOFF-1 (Law Enforcement Officers and Fire Fighters) Disability Board from 2012-2021 and was a member of the Anacortes Elks Lodge#1204. During his retirement, he was Cathy’s special helper in her La Conner classroom and he was also hired as the schools’ groundskeeper. They both retired from La Conner in 2008. Bob’s other passion was creative metal welding which he never tired of or retired from. He was known as everyone’s general handyman, too. Bob was not all work, he loved holidaying with Cathy in their motorhome, visiting family and friends, going to old car shows, metal art exhibits and yard sales all across the country. Bob is preceded in death by his parents, his brothers: George and Steven Strickert and his step father Dewey Clark; father-in-law: George Trout and two close friends: Dewey Williams and Wallace Sumner. He is survived by his wife of 36 years, Cathy; his son, Aaron Lee; grandchild: Taven; devoted nephew: Scott (Nikki) Strickert; mother-in-law: Lorene Trout; brother-in-law: Keith (Cynthia) Trout and family; extended family: Paula (Dennis) Quinby and their children Campbell and Braden; Van (Kenna) Brannon and their children Hudson and Ella Kate: uncles: Paul and Tom Brannon; dedicated neighbors: Gordon Smith and Pat Hoyland-Smith and cherished close friends: Mary and Bobby Hendren and their children Katina (Ian) Hernando and Jeremy Hendren, Ken Coates, Judy Rowell, Dennis (Sharon) Hillsinger, Iver (Cheryl) Johnson and their son Curt, and many more, too numerous to mention as Bob never met a stranger. Graveside services will be held 11:00 a.m. Saturday, September 18, 2021 at Wood Memorial Park. Family will receive friends 5:00 until 7:00 p.m. Friday, September 17, 2021 at The Wood Mortuary. In lieu of flowers, remember Bob by donating to your favorite charity. You may share memories of Bob and view photos of him at his memorial site: www.thewoodmortuary.com

After a seven-year battle with multiple health issues, Robert Lee Strickert, 77, surrounded by loving family and friends, passed peacefully at his residence on Friday, August 27, 2021, in Anacortes. Bob was born on March 31, 1944, in Anacortes,... View Obituary & Service Information

The family of Robert Lee Strickert created this Life Tributes page to make it easy to share your memories.

After a seven-year battle with multiple health issues, Robert...

Send flowers to the Strickert family.