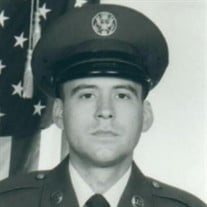 James Richard &#8220;Rick&#8221; Sanders, 63, passed away May 9, 2022. A native of Marion, Illinois, son of Dixie Lee Miller Sanders and the late James Loren Sanders, he was a U.S. Air Force Veteran of 11 years having served in Desert Storm,... View Obituary & Service Information

The family of Rick Sanders created this Life Tributes page to make it easy to share your memories.

Send flowers to the Sanders family.