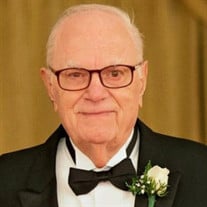 Nolen L. Brunson, 92, passed away on January 14, 2021 at Anderson Medical Center. A native of Allendale County, he was born on December 25, 1928 to the late W.W. Brunson, Sr. and Grace Tinsley Brunson. Reared on the family farm, he was a graduate of Allendale High School, Class of 1946. In 1948, he graduated with his AA from North Greenville College, and then completed a BA from Furman in 1950. In 1952, he married Margaret Ann “Jackie” Barnett. In 1954, he graduated from Tulane Law School with both JD and LLM degrees. He then served 3 years Active Duty with the US Army, Judge Advocate General’s Corps, followed by 30 years in the Army Reserves, retiring as Colonel. In 1957, he and Jackie relocated to Rock Hill, SC where he was a partner in the law firm Hayes, Brunson & Gatlin. Nolen retired in 1989 and eventually settled in Greenville, SC where he became an active member of Pelham Road Baptist Church, serving as Deacon, Trustee and Choir Member. Nolen was an avid genealogist, writing a number of books documenting family history. He completed his last publication, over 600 pages, in December of 2020, just before his 92nd birthday. Surviving him are his wife of 69 years, Jackie Brunson, two sons, David W. Brunson and his wife, CJ, of Sarasota, FL, and Charles E. Brunson and his wife, Anne, of Nolanville, TX; grandchildren, Katie Brunson Broach and her husband, Thomas, and Charlie T. Brunson; step-grandchildren, Chris Zermer, Jackie Liedtke D’Agostino and her husband, Joe, and Samantha Liedtke. A viewing and opportunity to pay last respects is scheduled for Sunday, January 17, 2021 from 2 PM-7 PM at The Wood Mortuary, 300 West Poinsett Street, Greer, SC 29650. Cryptside service will be held on Monday, January 18, 2021 at 3:30 PM at Graceland East Memorial Park Mausoleum, conducted by Pastors John Roy and Sam Coates. In lieu of flowers, please consider a memorial gift to Pelham Road Baptist Church, 1108 Pelham Road, Greenville, SC 29615. Online condolences may be made at www.thewoodmortuary.com

Nolen L. Brunson, 92, passed away on January 14, 2021 at Anderson Medical Center. A native of Allendale County, he was born on December 25, 1928 to the late W.W. Brunson, Sr. and Grace Tinsley Brunson. Reared on the family farm, he was a graduate... View Obituary & Service Information

The family of Nolen L. Brunson created this Life Tributes page to make it easy to share your memories.

Send flowers to the Brunson family.