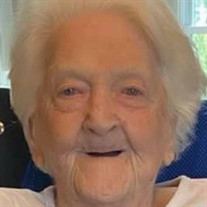 Mary H. King CRNA 93, widow of Larry W. King, passed away August 4, 2021 at Prisma Hospital, Greer, SC after an illness. A native of Worcester, MA, daughter of the late Lawrence P. Hallahan, Sr., and Elizabeth A. (King). She was a retired Certified Registered Nurse Anesthetist for St. Vincent’s Hospital for many years. Mary graduated from South High School, St. Vincent’s School of Nursing, trained at John’s Hopkins in surgery, graduated from St. Vincent’s School of Anesthesia and later earned her BSN from Anna Maria College. She has worked throughout the country as a nurse and touched many lives. Early in her career, Mary was an Army Nurse Cadet and volunteered her whole life with several organizations including the American Red Cross during Hurricane Andrew. Mary had a love of life and so many interests. She was an artist, a writer and pianist. Mary had a beautiful singing voice and had aspired to become an opera singer one day. She was in the Saint John’s choir for many years. She loved baseball, especially the Boston Red Sox and knew more about it than most people. Mary was a member of the Ancient Order of Hibernians and proud of her Irish heritage. Mary was full of life and had a wonderful sense of humor. Surviving are one son, John “Jack” King, one daughter, Laurie King, two grandchildren, Erin (King) Tittus and her husband Jeffrey; Jennifer Salaun; two great grandchildren, Emma and Lindsay Salaun; several close cousins, many nieces, nephews, friends, and her cat “Stewy”, who made her smile every day. Mrs. King was predeceased by four brothers, Lawrence Jr., John, Francis, Joseph and one sister, Patricia (Benoit) Hallahan. A memorial service will be held 4:00 p.m. Tuesday, August 10, 2021 at The Wood Mortuary Chapel conducted by Father Bart. Memorials may be made to the Alzheimer’s Association 123 W Antrim Dr, Greenville, SC 29607 Online condolences may be made to www.thewoodmortary.com

Mary H. King CRNA 93, widow of Larry W. King, passed away August 4, 2021 at Prisma Hospital, Greer, SC after an illness. A native of Worcester, MA, daughter of the late Lawrence P. Hallahan, Sr., and Elizabeth A. (King). She was a retired Certified... View Obituary & Service Information

The family of Mary H. King created this Life Tributes page to make it easy to share your memories.

Send flowers to the King family.