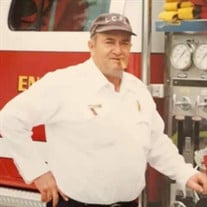 Malcolm Henry Fitts, 74, passed away December 18, 2020. A native of Greenville County, son of the late Henry Marion and Ruby Marcelle Farmer Fitts, he was a retired firefighter from Lake Cunningham Fire Department and was a member of Oneal Baptist Church. Captain Fitts served the Lake Cunningham citizens from 1977 – 2011. He was most known for his unlit cigar he chewed on most of the day. He would only light the cigar when a truck needed repair. Captain Fitts was the first full-time firefighter of the department. Malcolm volunteered with the department prior to his career start which began on November 5, 1967. He served a total of 44 years with the department. Surviving are his wife, Ruth Bridges Fitts of the home; one daughter, Joy D. Smith (David) of Greer; one brother, Olin Fitts (Cecil) of Greer; three sisters, Frances Barnette of Greer, Pat Dobson (Rainey) of Taylors and Ruby Golightly of Inman; two grandchildren, Glenda Paige Smith and Makaila Grace Smith; several nieces and nephews, great nieces and nephews, and great-great nieces and nephews; and numerous special friends. He was also predeceased by one sister, Melissa Searcy. Funeral services will be held 2:00 p.m. Tuesday, December 22, 2020 at The Wood Mortuary, conducted by Rev. Justin Anderson, Rev. Joe Seay and Rev. Wayne Davis, with webcasting available at www.thewoodmortuary.com. Burial will follow in Mount Lebanon Baptist Church Cemetery. The family will greet friends Tuesday following the committal service at the cemetery. The members of the Lake Cunningham Fire Department will serve as pallbearers and honorary escort. The family is at their respective homes. In lieu of flowers, memorials may be made to the Cancer Society of Greenville County, 113 Mills Ave., Greenville, SC 29605. Online condolences may be made at www.thewoodmortuary.com.

Malcolm Henry Fitts, 74, passed away December 18, 2020. A native of Greenville County, son of the late Henry Marion and Ruby Marcelle Farmer Fitts, he was a retired firefighter from Lake Cunningham Fire Department and was a member of Oneal Baptist... View Obituary & Service Information

The family of Captain Malcolm Fitts created this Life Tributes page to make it easy to share your memories.

Send flowers to the Fitts family.