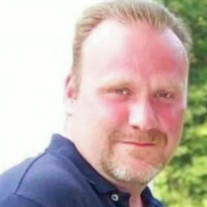 Edward Lamar Burnett, 55, passed away October 10, 2021. A native of Gretna, LA, son of the late James Dennis and Shirley Gilreath Burnett, he was an employee of Big &#8220;O&#8221; Dodge and a member of Little Mountain Baptist Church. Surviving... View Obituary & Service Information

The family of Lamar Burnett created this Life Tributes page to make it easy to share your memories.

Send flowers to the Burnett family.