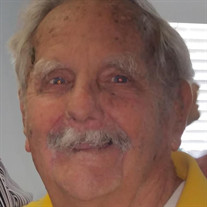 Kelly Odell Weeks, 92, died July 5, 2021 at his home in Lyman, SC. The son of Jacqueline “Jackie” Murray, Kelly was born in Miami, FL, April 28, 1929. He was raised by his grandparents and aunt in Bartow and Lake Buffum, FL, until his mother married in 1934. Moving then to Miami, Kelly was an active young man, being named all-city football and also working summers as a yacht crewman out of Miami with his step-father Nelson M. Weeks. Graduating High School and joining the US Air Force in 1948, Kelly was stationed at Anderson AFB, Guam, then Maxwell AFB, Montgomery, AL as a draftsman. After service, Kelly used the GI Bill to attend Stetson University from 1953-1957 where he was active in the Theater Troop, and upon graduation taught middle school speech and drama in Miami. Called to the ministry, Kelly attended Southeastern Theological Seminary from 1959-1963, graduating as an ordained Baptist minister. While on summer assignment from the seminary in Kingstree, SC, Kelly met and married Sylvia Brockinton of Andrews, SC, and after graduation Kelly returned to South Carolina with Sylvia where he preached at Kingsburg and Centenary Baptist churches. In 1970, Kelly moved his growing family to Union, SC and preached at Hebron Baptist Church until 1980, when he moved to Lyman, SC, supporting his family as a textile worker at Lowenstein and later Springs mills. Retiring in 1997, Kelly and Sylvia spent their retirement in Lyman until Sylvia’s death in 2011 and Kelly’s passing on July 5TH of this year. Both were long time members of Wellford Baptist Church. In addition to Sylvia, Kelly was preceded in death by his son David Kelly Weeks. Surviving relatives include daughter Melanie Condon and son-in-law Paul Condon of Gardiner, MT; son Richard Weeks and future daughter-in-law Amber Snipes of Brooksville, FL; niece and nephew Sarah and Alden Weeks of Rock Hill, and numerous 1st cousins around Florida. A memorial service is being planned for August. In lieu of flowers, memorials may be made at https://adfdn.org/ Online condolences may be made at www.thewoodmortuary.com

The family of Kelly Odell Weeks created this Life Tributes page to make it easy to share your memories.

Send flowers to the Weeks family.