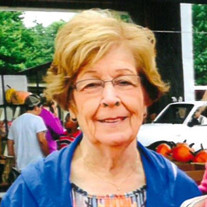 Johnnie Hannah Henderson, 85, of Greer, South Carolina, passed away on Tuesday, February 15, 2022, at The Phoenix at Greer. Johnnie, a lifelong resident of Greer, was born to the late John Ervin Hannah and Nancy Corene Dill Hannah. She was an established member of Fairview Baptist Church and the James Crocker Sunday School Class. Johnnie married the love of her life and best friend, the late Walter Morann Henderson, Sr. The two were married for 60 years. She was preceded in death by a brother, Walker Wiley Hannah and sister-in-law, Cathie Louise Smith Hannah; a son-in-law, Dr. Mitchell Fields Hollon; and one grandchild, Philip Lewis Byrd, Jr. After graduating from Taylors High School, Johnnie worked for Carolina Steel for 15 years. After retiring from Carolina Steel, she accepted the position as Senior Congregate Dining Coordinator for Greer Community Ministries. Johnnie’s vibrant personality and her love for seniors allowed her to excel in serving those at Greer Community Ministries. Many family members were blessed by Johnnie’s God given talent of detailed caregiving. She was a loving caregiver for JoHannah Joines while her mother was on duty as head nurse at Greenville General Hospital. She loved JoHannah as if she were her own daughter. Johnnie was blessed with many joys in her life, one of her greatest was her grandchildren. She was affectionately known as Mama Johnnie, Ja-Ja and MJ. She spent countless hours entertaining them and delighted in all aspects of it. She enjoyed involving them in making crafts each Christmas for their classmates, baking homemade cookies, decorating Easter eggs, and going on shopping sprees. Every Easter she would bake a bunny cake complete with all the trimmings and would adorn an Easter basket full of goodies for each grandchild. Each grandchild has many fond memories of their adoring grandmother. Johnnie was a talented seamstress, spending countless hours at her Bernina sewing machine. She enjoyed multiple forms of needlework such as crochet, knitting and cross-stitch. Some of her special work included a cross-stitch of her childhood home, draperies, and beautifully smocked and monogrammed dresses for her granddaughters. Her kitchen was the heart of her home where she made many loaves of sourdough bread and delicious Christmas treats. She and Walt worked side by side as she always delegated the dipping of the peanut butter balls in chocolate to him. This was an annual tradition as they shared their gifts of food throughout the community. Johnnie and Walt were passionate campers. They enjoyed adventures in the Western North Carolina Mountains to the Carolina Coast. Left to cherish Johnnie’s memories are her daughter, Patricia Hollon Byrd and her husband, Philip Lewis Byrd, Sr. of Charleston, SC; her son, Walter (Randy) Morann Henderson, Jr. and his wife, Sandra Farmer Henderson, of Richmond Hill, GA; grandchildren, Dr. Hannah Fields Hollon of Richmond, VA; Makenzie Elena Henderson and Maggie Adair Henderson, of Richmond Hill, GA; Jeremy Edward Byrd and his wife, Kristie Cantley Byrd, of Saint George, SC; and great-grandchildren, Landyn Elizabeth Byrd of Holly Hill, SC; Philip Lewis Byrd, III of Summerville, SC; and Baker Lee Byrd of Saint George, SC. Memorials may be made to Fairview Baptist Church Foundation for the Future, 1300 Locust Hill Rd., Greer, SC 29651 or Greer Community Ministries, PO Box 1373, Greer, SC 29652. The family wishes to thank the staff of The Phoenix at Greer for their professional and loving care. A graveside service will be held on Saturday, February 19, 2022, at 11:00 a.m. at Fairview Baptist Church Cemetery conducted by Reverend Gene Lockaby. Online condolences may be made at www.thewoodmortuary.com

Johnnie Hannah Henderson, 85, of Greer, South Carolina, passed away on Tuesday, February 15, 2022, at The Phoenix at Greer. Johnnie, a lifelong resident of Greer, was born to the late John Ervin Hannah and Nancy Corene Dill Hannah. She was... View Obituary & Service Information

The family of Johnnie Henderson created this Life Tributes page to make it easy to share your memories.

Send flowers to the Henderson family.