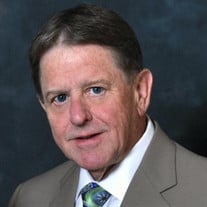 Joseph “Joe” Carroll Moon, 75, widower of Susan Clark Moon, passed away June 8, 2022, after a brief illness. A native of Lyman, South Carolina, Joe was the son of the late James Carroll and Catherine Clement Moon. He was an alumnus of James F. Byrnes High School and Wofford College, where he obtained a degree in business. After college, he established a successful career in textile sales. His talent for sales and engineering allowed him to travel and make friends throughout the country. In addition to his professional experience, he was the co-inventor of the spirit car flag, which was first created in the basement of his home. While business was important to Joe, he was most proud of his family. He was married to Susan for fifty years before her death and was her great love and caregiver. Joe was an amazing, generous father and father-in-law to Chrissy (Michael) Lancaster of Spartanburg and Robyn (Burton) Lee of Taylors. His four grandchildren, Catherine Grace Lancaster, Mattison Christine Lancaster, Bowman Clark Lancaster, and Eleanor Janie Lee, called him Poppa and were his pride and joy. He had one sister, Kay (Jim) Young of Columbia, and a niece, Angela (Russell) Carroll of Chapin, SC. He is also survived by his brother-in-law, Phil (Debbie) Clark, and his nephew, Will (Carson) Clark. An avid golfer for many years, Joe was a huge fan of the Clemson Tigers and Atlanta Braves. He also loved high school and college football. During the late 1980s, Joe served as the president of the Greenville Touchdown Club and was influential in starting the Greer Area Touchdown Club. He also served as the Greer club’s first president. Throughout his life, Joe was involved in school, work, sports, and church activities that afforded him great friendships. His most special friendships were those that spanned over five decades with his GRITS group. In his semi-retirement, he volunteered with Greer First Presbyterian’s Dunbar Buddies Program, reading to students at the Dunbar CDC weekly. His lifelong passion for learning allowed him to encourage the children to develop their own love of learning and reading. Joe will be memorialized during a service at Greer First Presbyterian Church on Friday, June 17, 2022, at 11 am. The service will be conducted by Rev. Will Shellbourne and Dr. Al Masters. Visitation will be held prior to the service from 9:30 am - 10:45 am in the church fellowship hall. Online condolences may be made at www.thewoodmortuary.com

Joseph &#8220;Joe&#8221; Carroll Moon, 75, widower of Susan Clark Moon, passed away June 8, 2022, after a brief illness. A native of Lyman, South Carolina, Joe was the son of the late James Carroll and Catherine Clement Moon. He was an alumnus... View Obituary & Service Information

The family of Joe C. Moon created this Life Tributes page to make it easy to share your memories.

Send flowers to the Moon family.