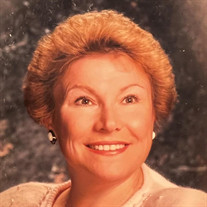 Jeanette Mae Dickinson Lamansky Gravelle, 79, known lovingly as Mammette and Grammette by her grandchildren, passed away surrounded by her loving family on April 1, 2022. Born on January 13, 1943, in Washington, Iowa, the daughter of the late Earl Willis and Ruth Eva (Davison) Dickinson. She was raised on the family farm near Brighton, Iowa. In 1950, at the age of 7, because Jeanette was painfully shy, her mother enrolled her in dance classes where she excelled and was asked to teach until 1961. She graduated from Brighton High School and joined a professional dance company that allowed her to travel across South America, the Caribbean, and the United States. She returned home in 1963 to marry her high school sweetheart Don Lamansky. They were blessed with three children, Curtis, Tamara, and Debra. Sadly, in 1980 they were divorced. In 1979, Jeanette opened Jeanette’s Dance Studio in Davenport, Iowa. She was affectionately called “Mom” by all her students. Expanding to four locations, she sold the studio after 20 years. In 1993, she married George Gravelle. In 1996, they moved to Greenville, SC to escape the winters. She was a member of Faith Baptist Church of Taylors. Her family was her life, and she spent her retirement years playing with her grandkids, talking daily with her children, writing her memoirs, yard saling, and antiquing. Surviving are her husband, George Paul Gravelle; three children, Curtis Lamansky and wife Maria (Tabler) of Sheboygan Falls, Wisconsin, Tamara Lamansky and fiancé Albert Sutton of Davenport, Iowa, and Debra Mills and husband Peter of Greenville, South Carolina; and six grandchildren, Philip and wife Kyra, Andrew, Anthony, and Elizabeth Lamansky, and Katelyn and Alexis Mills. She is also survived by a stepdaughter, Patricia Gravelle Padilla and husband Ron of Moline, Illinois; stepsons, Travis and Lucian Gravelle; three step-grandchildren, Anthony, Matthew, and Michael Padilla; sister, Georgia Baker and husband Bob of Washington, Iowa; and nieces, nephews, and other relatives. On May 9th from 11:30-12:00 AM, a funeral service to celebrate her life will be held in the Fireplace Room at Faith Baptist Church, Taylors, 500 W. Lee Rd. Pastors Curtis Lamansky and John Monroe will preside. Visitation will be from 10:00-11:30 AM and a graveside ceremony will follow the funeral at 2:00 PM in the M. J. “Dolly” Cooper Veterans Cemetery, 140 Inway Dr., Anderson, SC. Flowers may be sent to Faith Baptist Church or memorial gifts can be given to Hidden Treasure Christian School at www.Hiddentreasure.org. Online condolences may be made at www.thewoodmortuary.com.

Jeanette Mae Dickinson Lamansky Gravelle, 79, known lovingly as Mammette and Grammette by her grandchildren, passed away surrounded by her loving family on April 1, 2022. Born on January 13, 1943, in Washington, Iowa, the daughter of the late... View Obituary & Service Information

The family of Jeanette Gravelle created this Life Tributes page to make it easy to share your memories.

Send flowers to the Gravelle family.