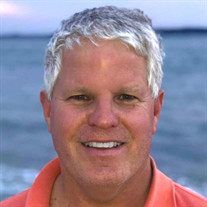 Herbert William O’Connell, 59, passed away on October 29, 2021. A native of Fort Worth, Texas, son of Arlene Grass O’Connell and the late Thomas William O’Connell, he was the Owner and General Contractor for TAG Builders LLC. He attended Brookwood Church. A man of many interests and few words, his early life consisted of perfecting his hockey game through the youth program in Fort Worth and furthering his skills in woodworking. He was invited to try out for the US Olympic hockey team. While at a tournament in Canada, he taught himself how to ski in one day. Herb was a natural athlete and took on new sports with ease. With a natural aptitude for designing and building, he spent time learning how to build his own boat and sharing it with the company of his friends on the lakes. Herb studied Mechanical Engineering at the University of Texas at Arlington. During his time there he participated on the SAE Mini Baja team and spent countless hours in the machine shop on campus. He loved the creative process of design and airplanes which led to his first career in the aerospace industry. He worked on the 777 design for Boeing and never tired of watching airplanes fly. He obtained his pilot’s license and later bought an airplane with his friend Norman from engineering school. Herb loved spending time with his family, and all he wanted was for them to be happy. He was a mentor to many young men on the path to Eagle Scout as the Scout Leader for Troop 776 in Greenville. He enjoyed working with youth of all ages and coached baseball and lacrosse. He was a constant source of encouragement and positivity for all. Surviving are his wife Laura Patterson-O’Connell, two sons; Spencer O’Connell of Salt Lake City, UT and Keegan O’Connell of Greenville; mother, Arlene O’Connell; one brother, David O’Connell of Talpa, TX; two sisters, Karen Hunter of Forth Worth, TX, and Susan O’Connell of Amarillo, TX. A memorial service will be held at Brookwood Church on November 19 at 12:00 conducted by Norman Ponder. The family will receive friends at 11:00 prior to the service. Memorials may be made to Boy Scouts of America 1 Park Plaza, Greenville, SC 29607. Online condolences may be made to www.thewoodmortuary.com.

The family of Herb O'Connell created this Life Tributes page to make it easy to share your memories.

Send flowers to the O'Connell family.