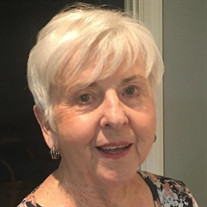 Glenda Belcher Smith, 82, of Greer, South Carolina, passed away on Saturday, February 26, 2022. Glenda was born to the late Paul and Hallie Cargell Belcher of Startex, SC. She married the love of her life Reynold Smith and moved to Greer a year later. They were married for 66 years and had two children, Terry Allan Smith and Tammy L. Smith Dixon. Glenda was a dedicated Christian, wife, mother, grandmother and great-grandmother. She was always thinking of others, serving her church, community and family. She retired from the Greenville County School District. She made a big impact on so many lives, always selflessly giving of herself and her time. She was a very active member of Fairview Baptist Church and the Greer community. She was preceded in death by her son, Terry Smith; a sister and brother-in-law, Martha and Bill Ezell; brother-in-law Robert Gary Vaughn; brother-in-law, Danny Gibson; brother and sister-in-law, Kenneth and June Smith; niece, Kelly Vaughn; nephew, Tony Turner. Surviving are her husband, Reynold Smith; daughter, Tammy Smith Dixon; a sister, Pat Vaughn; sister-in-law and husband, Jayne and Jerry Frye; sister-in-law and husband, JoAnn and Tom Garrett; sister-in-law, Kathy Gibson; four grandchildren, Alex Dixon, Zach Dixon, Lauren Lee, and Brooke Massengale; and three great grand-children, Jacob Lee, T.J. Lee and Conner Wyatt. Seven nieces and two nephews. A memorial service will be held 11:00 AM Tuesday, March 1, 2022, at Fairview Baptist Church conducted by Dr. Eddie Leopard. Honorary pallbearers will be the Jeanette Hood Sunday School Class. In Lieu of flowers, memorials may be made to Fairview Baptist Church Foundation for the Future, 1300 Locust Hill Rd., Greer SC 29652. The family would like to thank the nurses and doctors at Prisma, Greer Campus, for their diligence and loving care they provided. online condolences may be made to www.thewoodmortuary.com.

Glenda Belcher Smith, 82, of Greer, South Carolina, passed away on Saturday, February 26, 2022. Glenda was born to the late Paul and Hallie Cargell Belcher of Startex, SC. She married the love of her life Reynold Smith and moved to Greer a year... View Obituary & Service Information

The family of Glenda B. Smith created this Life Tributes page to make it easy to share your memories.

Send flowers to the Smith family.