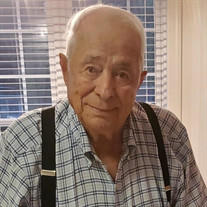 Eugene Barbare, 95, passed away February 18, 2022. A native of Greenville County, son of the late Homer Ernest and Evie Shore Barbare, he was a U.S. Army Veteran and a member of El Bethel Baptist Church. Surviving is his wife of 75 years, Louise... View Obituary & Service Information

The family of Eugene "Dinky" Barbare created this Life Tributes page to make it easy to share your memories.

Send flowers to the Barbare family.