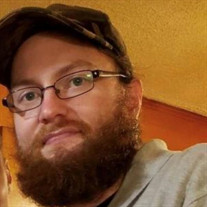 James Lawson “Dusty” Crump, passed away on November 7, 2021. Born in Greenville, SC on July 17, 1986. He was the son of James Jerule “Butch” Crump. In addition to his father, he was predeceased by his grandfather, Lawson DuRant Altman and beloved cousin, John DuRant Ducker. Since our Creator called Dusty home, we know he is enjoying his reunion with these family members who departed before him and is no longer in pain. He is survived by his mother, Donna DuRant “DeeDee” Altman Crump (Charlie Glenn), sister, Misty Howard (Chad), special nephews, Harley Morgan, Dylan Morgan (Kiara), special niece, Ashley Crump, and Grandmother Effie Kelley Altman of the home, and special cousins, Robert Beck and Bryant Ducker. Dusty was of Native American heritage and was a member of the Lower Easter Cherokee Nation of South Carolina in Gray Court, SC, where he was known by his Cherokee name Long Tassel. A memorial service will be held at a later date. Donations in Dusty’s name are asked to be sent to the Lower Cherokee Nation of South Carolina, P. O. Box 3988, Irmo, SC 29063.

The family of Dusty Crump created this Life Tributes page to make it easy to share your memories.

Send flowers to the Crump family.