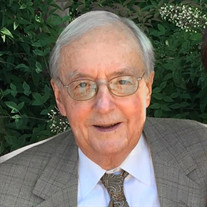 William Barnett Helton, Jr. passed away on Saturday, March 26, 2022, at his home surrounded by his loving wife, daughters, and his devoted pets. He was born in Charlotte, N.C., on January 22, 1933, to the late William Barnett Helton, Sr. and Jennie Jones Helton. He spent his youth in Morristown, Tennessee and graduated from Lee Edwards High School in Asheville, NC. He attended the University of Tennessee in Knoxville for his undergraduate studies where he was a member of the Sigma Chi Fraternity. He continued his education at the University of Tennessee Medical College in Memphis where he earned his medical degree in 1956. He did an internship and residency at Greenville General Hospital in Greenville, SC, from 1959-1962 specializing in Obstetrics and Gynecology. He served as a Captain in the U.S. Air Force as a staff OBGYN physician at Keesler Air Force Base in Biloxi, MS for two years. Dr. Helton, his wife and young family moved to Greer, SC, in 1962, where he established his private OBGYN practice on Memorial Drive, across from Allen Bennett Hospital. During his 37 years as a physician, he delivered numerous babies and cared for many families of Greer until his retirement in 1999. Dr. Helton was a lifelong Presbyterian and was an active member of First Presbyterian Church in Greer, SC. Over the years, he served as Deacon, Elder and as a longtime member of the Worship Committee. At his death, he was still serving as President of the Church Corporation. As a testament to his faith and desire to serve, he went on many medical trips to Africa after his retirement. He was blessed to serve the women and children of Malawi. Dr. Helton was a well-rounded person with many hobbies. Over the years, he was an accomplished tennis player, golfer, nationally ranked competitive pistol shooter, cyclist, photographer, and avid reader. An animal lover, he always had a faithful dog and cat by his side. He was a lifelong learner also and instilled in his four daughters a desire to be independent and to work hard to achieve their goals. His children and grandchildren’s accomplishments were a source of joy and pride for him. He is survived by his devoted wife of 67 years, Anne Christmas Helton of the home; his daughters, Karen Helton Rhodes (Steven) of Edisto Island, SC, Linda Helton Taylor (Stan) of Pfafftown, NC, Laura Helton Snead (John) of Hodges, SC and Mary Helton Ludlow (Mark) of Greer, SC; grandchildren, William Taylor (Katarina) of St. Petersburg, FL, Kate Snead Stover (Lewis) of Atlanta, GA, Jane Snead of Montgomery, AL, Cameron Rhodes (Phillip) of Charleston, SC, Jackson Taylor of Lexington, NC, Katherine Taylor (Eric) of Winston Salem, NC, Charles Ludlow of Greenville, SC and Christopher Ludlow of Greenville, SC and great-grandchildren, Charles Taylor and Chaynning Taylor. He was a loving husband, father, grandfather, and great-grandfather. In addition to his parents, Dr. Helton was predeceased by his only sister, Jenny Lee Helton Easley. The family would like to express appreciation to his devoted caregivers. Their loving and compassionate care was felt by his entire family. A funeral service will be held at 11:00 a.m. Wednesday, March 30, 2022, at First Presbyterian Church in Greer, SC, conducted by Rev. Will Shelburne. The family will receive friends after the service in the Fellowship Hall of the church. In lieu of flowers, contributions may be made to First Presbyterian Church, 100 School Street, Greer, SC 29651. Online condolences may be made at www.thewoodmortuary.com.

The family of Dr. William "Bill" B. Helton Jr. created this Life Tributes page to make it easy to share your memories.

Send flowers to the Helton family.