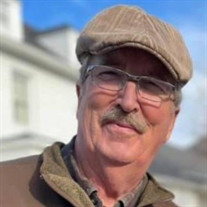 Donald “Don” Lee Jones would have charged hell with a water pistol for the love of his life, Diane. Praise God, instead heaven celebrated his arrival on September 14, 2021. Donald Lee Jones, born January 28, 1957, the son of the late Roy and Mary Pitts Jones, was known as Don to some and Donnie to others, but the name he loved most was Grandy! Grandy was the embodiment of selfless love, a legacy to be carried on by the eight grandchildren that called him that. If Diane (Nina to the grandkids) was his love, the grandkids were his pride and joy! Olivia (20), Owen (16), Adeline (14), Sarah Belle (11), Liam (11), Miles (9), Nathan (6), and Sloane (6) hit the grandpa lottery with Grandy. He made the best pancakes (seriously), he could fix anything, and he never left or hung up without an “I love you.” Never. Hunting, camping, fishing, cheering at all the ball games, Grandy checked every box. Most of all, he made clear his love for Jesus and his trust in Him. Donnie and Diane raised two amazing girls, Candace (Grugan) and Natosha (Kissinger), each of whom married guys that will never match their dad, but make a good effort. Diane’s not done yet. Donnie loved his girls fully and unconditionally, and showed it! Along the way, over 39 years of marriage, Donnie and Diane created and ran two successful businesses, Jones Farm Supply and Just for You Jewelers. Donnie was smart too: he figured out jewelry sold for more than tomato seeds and that he could repair jewelry in the air conditioning, so the Farm Supply closed years before the jewelry store. He was a great friend, husband, father, brother and son. He is healed now, he is healthy, and most likely pickin a banjo or playing a guitar in heaven’s bluegrass band. He would want you to know that. We know that, but we miss him. Donnie is survived by his wife, Theresa Diane Vaughn Jones of the home; two daughters, Candace J. Grugan (Will) and Natosha Kissinger (Wes) both of Greer; two brothers, Rev. Frank Jones and Randy Jones both of Greer and three sisters, Mary Ann Webster of Lexington, South Carolina, Patsy McBride of Greenville and Claudia Jones of Greer. Funeral services will be held 2:00 p.m. Sunday, September 26, 2021, at Fairview Baptist Church conducted by the Rev. Frank Jones. Private burial will follow. The family respectfully request memorials be made to Greer Christian Learning Center, Post Office Box 2013, Greer, SC 29652-2013. The family is at their respective homes. Online condolences may be made to www.thewoodmortuary.com.

Donald &#8220;Don&#8221; Lee Jones would have charged hell with a water pistol for the love of his life, Diane. Praise God, instead heaven celebrated his arrival on September 14, 2021. Donald Lee Jones, born January 28, 1957, the son of the... View Obituary & Service Information

The family of Don L. Jones created this Life Tributes page to make it easy to share your memories.

Donald “Don” Lee Jones would have charged hell with a water pistol...

Send flowers to the Jones family.