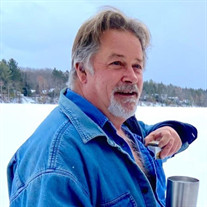 Derek Michael Laymon, of Greer, South Carolina & Milledgeville, Georgia passed away unexpectedly on September 12th, 2021, at the age of 60. Derek was born the 6th of January,1961 in Mildenhall, England. He is survived by his wife Connie Laymon (Shaw), his children: Sarah Differt & husband Nick, Stosh Jones & wife Michelle, Jeremy Laymon, Andrew Jones & wife Amber, Rhiannon Hathaway & husband Nick, Jared Laymon, Chase Laymon, Gabrielle Laymon, Gage Laymon, Makenna Laymon, and Emberlynn Laymon; his grandchildren: Makayla & Dakota Differt, Brelynn & Annaleigh Jones, Aiden Jones, and Armie Hathaway; his sister Kim Sidorick, his brother Rob Laymon, and numerous nieces, nephews and extended family. Derek is preceded by his parents Robert & Dolores Laymon (Ream) and brother Kerry Laymon. Derek lived his formative years in Mentor, Ohio with his mother and three siblings. A self proclaimed graduate of the school of life, Derek worked his way up in the plastic strapping industry which allowed him to make connections and touch others all over the world. He left an impression upon anyone he met with his hard work ethic, generosity of spirit, wit & wisdom. Derek lived life with no regrets and had a deep appreciation for his blessings. He had a “big heart”, as Rob would say. As a family, we struggled to write this final homage to Derek. He was funny, he was old school - a man of strength, resiliency, and aspirational confidence - more dimensional a man than words can properly describe. It’s our hope that in sharing some of these descriptive words, those who knew him well will better understand and fondly remember the man he was: Philosophical, deep, frustrating, stubborn, faithful, giving. A preacher, a partier, a fixer, prankster & lover of Bud Light. Grounded, charismatic, energetic, resourceful, polarizing. A gambler, a Brown’s fan, a Buckeye, an Indian, & a man of morals. Stern but genuine, a self-proclaimer, and a believer in Jesus. The outdoorsman, the fisherman, & the grill-master. An optimist, a realist, and a pessimist. (some words not fit for print) A coach and advisor who loved his family deeply. Although our world will never be the same, we find peace in the knowledge that Derek was unafraid of the day when “the big man calls him home”. Derek lived his life with the utmost determination and guided by love - the same principles which governed the teaching of his family. Derek believed we were all here to pass on a singular valuable lesson to another soul. We are here to testify that Derek fulfilled his quota a thousand times over, everyday. With a tight hug and a firm handshake, we say goodbye to Derek as we knew him - only to see him on the other side. I love you, Derek. We love you, Dad. In the coming weeks, we will come together to celebrate Derek’s life and legacy in person. The family will reach out directly with more information. Memorials may be made to the family at 105 Farrar Lane, Greer, South Carolina 29651. Online condolences may be made at www.thewoodmortuary.com.

Derek Michael Laymon, of Greer, South Carolina & Milledgeville, Georgia passed away unexpectedly on September 12th, 2021, at the age of 60. Derek was born the 6th of January,1961 in Mildenhall, England. He is survived by his wife Connie Laymon... View Obituary & Service Information

The family of Derek Michael Laymon created this Life Tributes page to make it easy to share your memories.

Send flowers to the Laymon family.