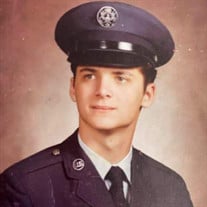 David M. Wicks died peacefully on March 7, 2021, at 64 years old. He was born in Brooklyn New York on August 1, 1956 to the late Warren and Harriet Wicks. David joined the Air Force in 1975 as an Airman First class where he spent time in both Oahu, Hawaii and Omaha, Nebraska, respectively, before his honorable discharge in 1977. After the Air Force he went into the workforce before getting his degree in Accounting from Tunxis Community College in 1997. He met his wife, Teresa in 1997 and they were married on July 4th, 1998. They were married for 22 wonderful years and shared a beautiful blended family together. David enjoyed spending his Sunday mornings attending church at Upstate Five Forks where he grew close relationships with his pastor and the parishioners who attended with him. David had a passion for NASCAR and after church would spend most of his Sunday afternoons watching races rooting for his favorite driver, Jeff Gordon. David loved to go fishing and spending his time near the water. Most of all, he loved spending time with his grandchildren. David spent a lot of time guiding and directing them, he was always giving them words of wisdom to steer them in the right direction in whatever stage of life they were in. David is survived by his wife, Teresa Thomas Wicks; son, Andy King (Jennifer); daughters, Jessica Wicks and Sarah Majchrowicz (David); sisters, Paula Bryan (John) and Elaine Smith (Tim); brother, Phil Wicks (Lorraine). He also left behind six loving grandchildren who were the light of his life, Mark, Natalie and Robert King, Jaxon, Charlotte and Josephine Majchrowicz, as well as his brother-in-law, Rick Thomas (Donna) and many nieces and nephews. Funeral services will be held 1:00 p.m. Thursday, March 11, 2021 at Upstate Church Five Forks, 13 Five Fork Plaza Ct., Simpsonville, SC 29681; followed by a graveside committal at Graceland East Memorial Park, which will be open to all. Pallbearers will be Andy King, Mark King, David Majchrowicz, Tim Smith and Rick Thomas. Honorary escort will be his co-workers of S.C. Tool. The family is at their respective homes. Memorials may be made to Greenville County Cancer Society, 113 Mills Avenue, Greenville, SC 29605. Online condolences may be made at www.thewoodmortuary.com.

David M. Wicks died peacefully on March 7, 2021, at 64 years old. He was born in Brooklyn New York on August 1, 1956 to the late Warren and Harriet Wicks. David joined the Air Force in 1975 as an Airman First class where he spent time in both... View Obituary & Service Information

The family of David Matthew Wicks created this Life Tributes page to make it easy to share your memories.

Send flowers to the Wicks family.