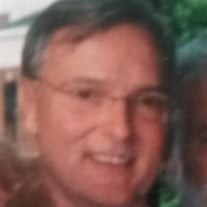 Charles Barry Reynolds, 63, passed away November 15, 2021. A native of Greenville, South Carolina; he was the son of Mary Ann Fowler Reynolds Dowd and the late Charles Edward Reynolds, Barry graduated from Northern, VA Community College, was a Radiology Technician for Fort Belvoir, Virginia Hospital, a member of All Saints Episcopal Church, Atlanta, GA and lived in Arlington, VA for the last 25 years. He was the most loving son in the world. Surviving in addition to his mother and step-father, Johnny Dowd, is a sister, Pamela Reynolds Smith and her husband Bob, of Cayce, South Carolina; stepbrother, John David Dowd (Anna); stepsister, Leslie Powell (Robby); uncles and aunts, Jimmy and Joyce; Allan and Gayle Fowler all of Greer; numerous nieces and nephews and dear best friend Mike Henson who was Barry’s confidant for all the years. Mr. Reynolds was predeceased by his grandparent Edith and Jesse Reynolds of Travelers Rest; Eloise and Toy Fowler of Greer and his partner, Steve Piecara. A graveside service will be held at 11:00 a.m. Saturday, November 20, 2021, at Sharon United Methodist Church Cemetery conducted by Mr. Weldon Fallaw and assisted by Ms. Flo Johnson and Mr. Bob Smith. Visitation will be held after the service in the fellowship hall. Memorials may be made to Sharon United Methodist Church Cemetery Fund, Post Office Box 418, Reidville, SC 29375. Online condolences may be made at www.thewoodmortuary.com

The family of Charles Barry Reynolds created this Life Tributes page to make it easy to share your memories.

Send flowers to the Reynolds family.