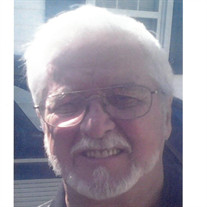 Charles &#8220;Mickey&#8221; Mitchell Cromer, 79, husband of the late Judy B. Cromer, passed away February 12, 2022. A native of Greer, son of the late Melvin Merle and Evelyn Adell Casey Cromer, he was a machinist for Michelin, a member of... View Obituary & Service Information

The family of Charles "Mickey" Cromer created this Life Tributes page to make it easy to share your memories.

Send flowers to the Cromer family.