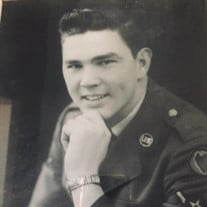 Billy Holcombe, 89, passed away peacefully September 12, 2021. Bill was a devoted veteran who served with pride and honor in both the Korean and Vietnam wars. His military specialties included tank driver and later fire and rescue. Bill was born on April 25th, 1932, in Waynesville, NC to Rachel Holcombe. He grew up in Canton, NC where he spent his youth helping on the farm and when the chores were done enjoyed hunting and fishing. He loved telling stories about his hardscrabble young life in the hills, including killing a bear at the age of ten that provided food for the family. When Bill was 17, he joined the Army in 1949 and shortly thereafter was in basic training at Fort Jackson, SC. After basic training, Bill was stationed at Fort Hood, TX where he received armored vehicle training. Within a few months he was driving a tank on the front lines. After serving in Korea, he enlisted in the Air Force and spent eight years abroad as part of his military service. During his time in France, he met Marcelle Denise Gorse, who he married in 1957. The young couple moved to the States in 1960 and were stationed at Edwards Air Force, CA. Bill would go on to serve 10 more years in the Air Force which included being stationed in Montgomery, AL (Gunter & Maxwell AFB) and two tours of Vietnam. He would retire from the military in 1970. After his military service, he would relocate his family to Greenville, SC where he earned a degree from Greenville Technical College. He was later employed by the Greenville County School System for over 20 years, working at both Lee Middle School and Greenville High School. Those to cherish his memory are his two children, daughter, Barbara Barnett of Spartanburg and his son, Bob Holcombe (Paula) of Anderson. “Pop Pop” is also survived by his four grandchildren, Rebecca Crow (Harry), Lewis Barnett, Hunter Holcombe, and Jennifer Holcombe, and many nieces and nephews, great nieces and nephews, and friends. He is preceded in death by his wife, Marcelle Denise Gorse Holcombe; his mother, Rachel; his brother, Joseph “Joe” Holcombe; and his three sisters, Betty Burgess, Bennie Mae Plemmons and Patsy “Pat” Young. A graveside service, with military honors, will be held 3:30 p.m. Thursday, September 16, 2021, at Hillcrest Memory Gardens, conducted by Rev. Keith Kelly. In lieu of flowers, memorials may be made to American Legion Post of Greer, 421 Snow Street, Greer, SC 29651. Online condolences may be made at www.thewoodmortuary.com.

Billy Holcombe, 89, passed away peacefully September 12, 2021. Bill was a devoted veteran who served with pride and honor in both the Korean and Vietnam wars. His military specialties included tank driver and later fire and rescue. Bill was... View Obituary & Service Information

The family of Billy Holcombe created this Life Tributes page to make it easy to share your memories.

Send flowers to the Holcombe family.