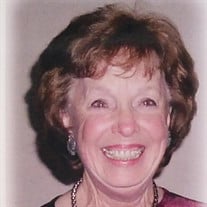 Barbara Strickland Smith, 88, met the beloved Savior she always called "the Lord Jesus Christ" on September 25, 2021 in Greer Memorial Hospital, of new and aggressive cancer in her spine. She was born January 17, 1933 in Sciotoville, OH, to Sally and Noah Strickland, of nearby Wheelersburg. They had three girls and three boys, of which she was the fourth child. She attended Wheelersburg High School, and then worked at the Portsmouth Gaseous Diffusion Plant at Piketon, OH, which enriched uranium. She met and married Robert Don (Bob) Smith in Albuquerque in 1969. They combined their families—five children and poodle, Tuffy—and during their 51.9-year marriage, they lived in Albuquerque, Denver, Colorado Springs, Potomac, MD, Chattanooga, Stamford, CT, and six years in the London borough of Richmond, England. They came to Greenville in 1993, and each lived here longer than any other place. Both have loved it and its people. Very friendly and sociable, Barbara joined Newcomers of Greater Greenville almost immediately, and in her second year, she was nominated for President, where she served well as Newcomers grew. In those days, one had to drop out after three years, and she hated to leave that multitude of new friends. She and Bob joined Shannon Forest Presbyterian Church (now Eastside Presbyterian) the first year. There, she was known by everyone as "the sweetest lady in the church," but especially by the children, who loved her. She never failed to speak to them, listen to them, joke with them, compliment and encourage them—at church, in her neighborhood, in Publix, Walmart…anywhere. She also had a gift for bonding with women—really knowing them, then empathizing, sharing, supporting, and encouraging. Growing up with brothers, she was always athletic. She loved tennis and golf and played them pretty well, even making a hole-in-one at Thornblade and winning their Ladies Net Championship in 1999. Her joyful, positive nature served her and her family very well as she struggled with dementia. She never lost her sense of humor; she was a joy until the cancer and other problems overwhelmed her body, and all who knew her were blessed in some way. She is survived by her husband, younger sister, Judith Raker (Jay) of Franklin, TN, sister-in-law, Anne Strickland of Cocoa Beach, FL, daughters Leslie Anita Woods (Bobby) of Anderson, SC, Kimberly Ann Gallo (Danny) of Stamford, CT, Patricia Gail Stevenson (Tom) of Weston, CT, sons Richard Daniel Smith of Bahir Dar, Ethiopia, and Michael Allen Smith of Colorado Springs, seven grandchildren, and thirteen greatgrandchildren. A visitation for all will be held at 11:00am, Saturday, October 9, 2021 at Eastside Presbyterian Church, 830 Garlington Road 29615, followed by a celebration of her life at noon. All are welcome, and masks are at the visitor’s discretion. The service will be streamed on the YouTube and Facebook channels of Eastside Presbyterian Church. In lieu of flowers, memorial donations may be made to Eastside Presbyterian Church (EastsidePres.com) or the Alzheimer's Association (Alz.org). Online condolences may be made to www.thewoodmortuary.com.

Barbara Strickland Smith, 88, met the beloved Savior she always called "the Lord Jesus Christ" on September 25, 2021 in Greer Memorial Hospital, of new and aggressive cancer in her spine. She was born January 17, 1933 in Sciotoville, OH, to... View Obituary & Service Information

The family of Barbara Strickland Smith created this Life Tributes page to make it easy to share your memories.

Send flowers to the Smith family.