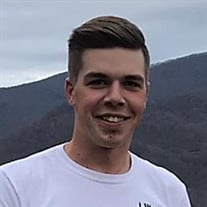 Aaron Kurt Kargela was born July 16, 1999, in Peterborough, New Hampshire, the third child and second son of Kurt and Lydia Kargela. On April 22, 2021, he died unexpectedly in Welford, South Carolina, surrounded by three of his brothers and some of his closest friends. In God's infinite wisdom and to fulfill His own purposes, although unfathomable to us, the Lord called Aaron home to Himself at the age of 21, only two days before he was to be united in marriage to Rochelle Seppala. Aaron was baptized and confirmed in accordance to the doctrine of the Apostolic Lutheran Church and by God’s grace, remained in faith until his death. Aaron relocated several times after graduating, living for a short time in Lake Norden, SD, New Ipswich, NH, and in May 2020, settling in South Carolina, where he was employed as crew foreman for DTH Construction. In the months before his death, most of his spare time was spent building his house and on date nights with Rochelle in his little ‘yoda’. Aaron had very recently moved into his house and happily anticipated a home with his soon-to-be wife, Rochelle. Aaron had earned his student’s pilot license and enjoyed flying. He was a gifted, self-taught pianist, and many benefited from his God-given talent. Aaron had a pleasant, non-complaining, outgoing nature, and we were blessed by his sweet and thoughtful ways. He was a well-loved, special guy and we are left to mourn him for our remaining days and await when we can be reunited in heaven through the merits of Christ alone. Aaron is survived by his parents, Kurt and Lydia Kargela of Rindge, NH, his fiancée, Rochelle Seppala of Campobello, SC; and seven siblings - five brothers and two sisters; Meghan (with Reuben) Somero of New Ipswich, NH; Micah (with Sarah) Kargela of New Ipswich, NH; Amasai, Kenton, Klark, Kelvin, and Liahna Kargela all at home in Rindge, NH; two nephews Joseph and Dean Somero; two nieces Bernice and Linna Somero; maternal grandfather, Stewart Seppanen of Vienna, SD; paternal grandparents, George and Karen Kargela of Calumet, MI; as well as many aunts, uncles, cousins and friends. Aaron was preceded in death by his maternal grandmother, Cora Seppanen, and four cousins: Joel Seppanen, Thomas Burdick, Ezra Seppanen, and Ainsley Kargela. Funeral services will be held 11:00 AM Wednesday April 28, 2021 at Eastside Apostolic Lutheran Church, 2200 Mays Bridge Rd, Greer, SC. The committal service will be held in New Hampshire at a later date. Calling hours will be Tuesday, April 27, 2021, from 6-9 p.m. at Eastside Apostolic Lutheran Church. Online condolences may be made to www.thewoodmortuary.com.

Aaron Kurt Kargela was born July 16, 1999, in Peterborough, New Hampshire, the third child and second son of Kurt and Lydia Kargela. On April 22, 2021, he died unexpectedly in Welford, South Carolina, surrounded by three of his brothers and... View Obituary & Service Information

The family of Aaron Kurt Kargela created this Life Tributes page to make it easy to share your memories.

Send flowers to the Kargela family.